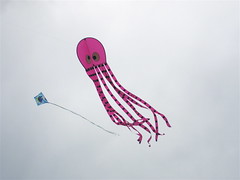 Flickr is amazingly better for so many reasons, but two of the biggies are that it allows comments and notes on every single picture, and that it makes it especially easy to mark certain photos as “friends & family only” and leave others open to the rest of the world. To see those friends & family photos, you’ll need to have a Flickr account and add me as a contact, but that should be fairly painless as Yahoo actually owns Flickr and you can sign right into Flickr with your existing Yahoo account (which I believe every man, woman, child, dog, cat, parakeet, and pet chinchilla in America now has).

Oh, and the picture in this post is just a goofy one that I especially liked from our trip to the Zilker Kite Festival last weekend.

folks before you had this to say:

got something to say about that?

This is an archived blog post, first published Sunday, March 12th, 2006 at 1:23 am, filed under: family, friends, fun, personal