About two and a half years ago I played a gig at the downtown Austin farmers’ market where I got to play guitar and focus entirely on my own material, something I hadn’t done in many years. In January I had another opportunity to do it again, so I rounded up three great musicians to play with: Dennis Ludiker and Matt Mefford from MilkDrive and Trevor Smith from Green Mountain Grass, The Bluegrass Outfit, and various other Austin acts.

This time I was also lucky to have my buddy Justin Burke doing the audio engineering and so we got some of it recorded: here’s most of set 2.

I called the band WYSIWYG for the day, a one-off I won’t use again now that I know that some band in France uses it. A lot of these tunes are a little rough the first time through the changes and many of the endings are pretty ragged too, since we were basically unrehearsed for all this (we’d just met up a couple nights before and played through most of the songs once each so they’d have some slight familiarity), but once the guys get their ears wrapped around each song there really is some spectacular playing here and there. Oh, and Violet and Graham got to sit in and sing “The Alligator Song,” as they do at many of my gigs these days :)

Cheris caught a couple of tunes from the first set on video with our Flip cam â€” there’s plenty of wind noise but overall these guys played such great stuff on this tune that I had to post it. The mom swinging her kid around right in front of the camera near the end of the video is pretty awesome too…

There’s some second set video footage as well; I’ll put that on YouTube after I have a chance to update it with the wind-free audio that Justin captured.

Looking forward to doing one of these again if I can find the opportunity to do that when the MilkDrive guys aren’t on the road. 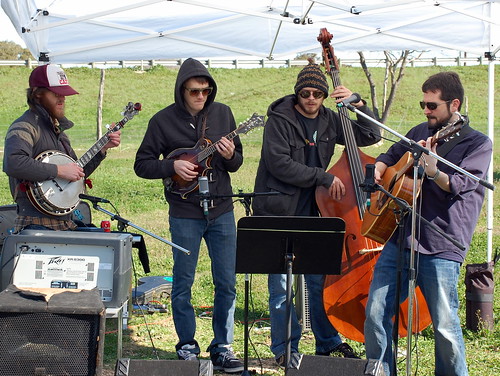 folks before you had this to say:

got something to say about that?